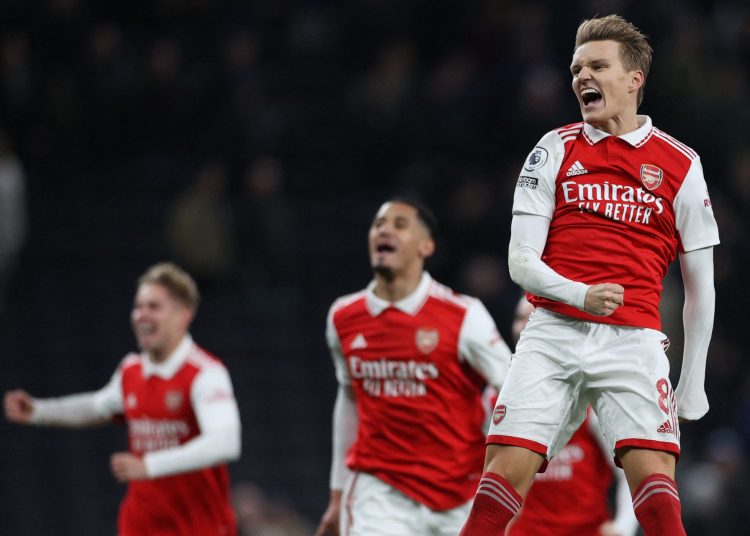 Arsenal moved eight points clear at the top of the Premier League table with a 2-0 win over Spurs in a pulsating North London derby at the Tottenham Hotspur Stadium.

Mikel Arteta’s side, seeking to capitalise on Manchester City’s defeat to Manchester United on Saturday, went ahead when Hugo Lloris clumsily spilled a Bukayo Saka cross into his own net.

Martin Odegaard then capped a dominant first-half display with a stunning long-range effort which ultimately sealed Arsenal’s first Premier League away win over Spurs since 2014.

Antonio Conte’s side improved in the second half following yet another insipid first-half showing, but they could not find a way past Aaron Ramsdale, who made a string of fine saves.
In chaotic scenes after the final whistle, the Arsenal goalkeeper then appeared to be kicked by a supporter behind the Spurs goal as he went to retrieve his water bottle following an altercation with Richarlison.
The situation was quickly diffused, however, leaving Arsenal to celebrate a victory which puts them in a commanding position in the Premier League title race and leaves their north London rivals five points behind fourth-placed Manchester United in fifth.
Source: Sky Sports
Tags: ArsenalNorth London DerbyTottenham Hotspur