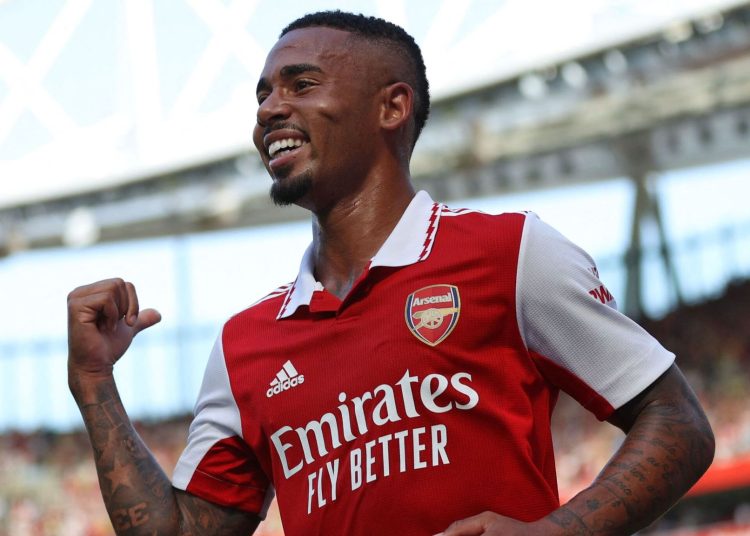 Gabriel Jesus was red hot as he struck his first two competitive goals for Arsenal in a dramatic 4-2 win over Leicester on a sweltering afternoon at Emirates Stadium.

The Brazilian was unfazed by the heat hitting 33C in north London, bending in a brilliant opener with the help of a slight deflection (23) before nodding in his second (35) after Jamie Vardy unintentionally flicked a corner to the back post to mark his first Emirates Premier League appearance as a Gunner in style.

Vardy had a penalty decision given and then rightly taken away after VAR Mike Dean advised referee Darren England to re-assess the minimal contact between Ramsdale and the striker just before half-time. Temperatures rose in the stadium when a replay was shown on the big screen, with the Foxes frontman loudly booed.

The action and goals continued to flow after the break, with Leicester twice getting a foothold in the match and Arsenal twice swiftly striking back.

First, an own goal from the otherwise impressive William Saliba (53) was countered two minutes later by an equally bad blunder from Leicester ‘keeper Danny Ward, which allowed Granit Xhaka to sweep in.

And then James Maddison’s drive (74) was followed within 60 seconds by Gabriel Martinelli’s second of the season.

Arsenal could easily have scored more – Xhaka and Jesus hit the woodwork in either half – but two wins from two builds their early-season confidence, while Leicester – who have only signed back-up ‘keeper Alex Smithies in the transfer window – were again exposed by a set-piece and looked in need of additions.