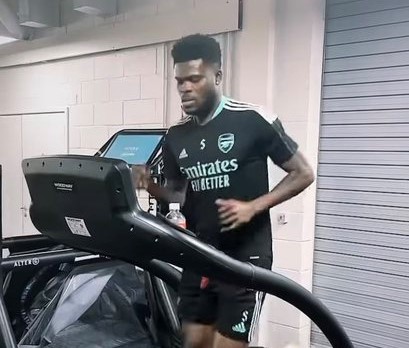 Arsenal star Thomas Partey is set for a quick return from injury after he posted videos of himself working hard at the gym.

Partey was forced off the field with 16 minutes left to play against Crystal Palace two weeks ago at Selhurst Park and was expected to be out for at least 6 weeks.

Mikel Arteta claimed the midfielder picked up a “significant injury”, which is understood to affect his thigh and could keep him sidelined for a number of weeks.

However, the Ghana international is determined to return to action as soon as possible and has hit the gym to step up his rehabilitation.

The 28-year-old shared a video on his personal Instagram account showing him breaking a sweat on the spin bike.

Arsenal fans expectedly went crazy at the news of a possible early return for their Ghanaian midfielder.

Thomas Partey running on a treadmill 😳 is he on his way back????

I have a feeling, based on zero factual evidence, that Thomas Partey will be back for the West Ham game.

Imagine having a fit Thomas Partey for the last 5 games. I’d have been singing the champions league anthem by nowpic.twitter.com/26BKjY175q

Thomas Partey back on the running machine after his thigh injury.#AFCpic.twitter.com/HJuHiuGQBX

There are chances Thomas Partey may return for the West Ham match on Sunday.Thomas Partey is ahead of schedule to return to Arsenal from injury. He is recovering faster than the club expected.#COYGpic.twitter.com/WhnkYewiHE

I just saw@Thomaspartey22running on a thread Mill on Facebook..he looks like he might make it back before the season ends…I really wish he would..#Arsenal#Gonners#COYG

Arsenal star Thomas Partey, who some feared had been ruled out for the season, is working hard to return to the team ahead of schedule.

Thomas Partey back early after we beat Chelsea and United without him?pic.twitter.com/6Yx1czRGw4

Thomas Partey is ahead of schedule to return to Arsenal from injury. He is recovering faster than the club expected.
[@LinkUpArsenal]

Thomas Partey A.K.A “the glue” hits the gym listening to KILLA BLAKO on the road to recovery 💪🏾🇬🇭🇬🇭🇬🇭pic.twitter.com/o2W8MivtUh

Thomas Partey almost ready. I hope he makes it on time.pic.twitter.com/P8WuXXqvhQ

Sweet, Thomas Partey might be back sooner. That’s some good news. 🙂

Another set up of supporters have kept their fingers crossed hoping Partey will be available for the North London derby against Spurs on May 12.

Would be lovely if Thomas Partey was fit for spurs, basically 3 weeks away…🤞🏽

Injured Arsenal midfielder Thomas Partey has posted a video on his Instagram of him running on a treadmill. Hopefully, he is back before the north London derby 🤞pic.twitter.com/Fu7asW1KRm

Dear Thomas partey, just come back for the NLD, that’s all i ask.pic.twitter.com/kr4wb2dNiL

Roumour has it that Thomas Partey will be fit for the Spuds game….That’ll be a bonus !🔴⚪️

Thomas Partey may be way ahead of schedule on his road to recovery, but we still shouldn’t rush him back prematurely. We have enough quality to beat West Ham’s B team and Leeds without him. Get him fighting fit for Spurs and don’t unnecessarily risk him any sooner.

Just saw Thomas Partey running on a treadmill. I guess his looking forward to running at the White Hart Lane on 12th May.

Thomas Partey could be back for the NLDpic.twitter.com/ytizo7N6SE

Meanwhile, another fan has opined despite his imminent return from injury, that Arsenal must go for a good replacement for the player ahead of next season.

As much as I like Thomas Partey, long term we may need to replace him. He’s way too injury prone, and I think Sambi is just too raw to replace what Partey does for us in that single pivot role. I hope he stops getting injured, but if not he may be replaced

Thomas Partey’s injury is ridiculously vague he’s cycling and jogging like an Olympian.

#ARSThomas Partey running on a treadmill per his IG. Good sign in that he’s progressing but this still doesn’t tell us much in terms of return timeline. Key will be when he progresses to higher load activities on the hip flexor/quad (sprint, kicking, multi-directional)https://t.co/PhjyhbQVeg

At Arsenal, Thomas Partey seems to have unlocked a trait of quickly recovering from injuries.pic.twitter.com/b5oGAH6eYa