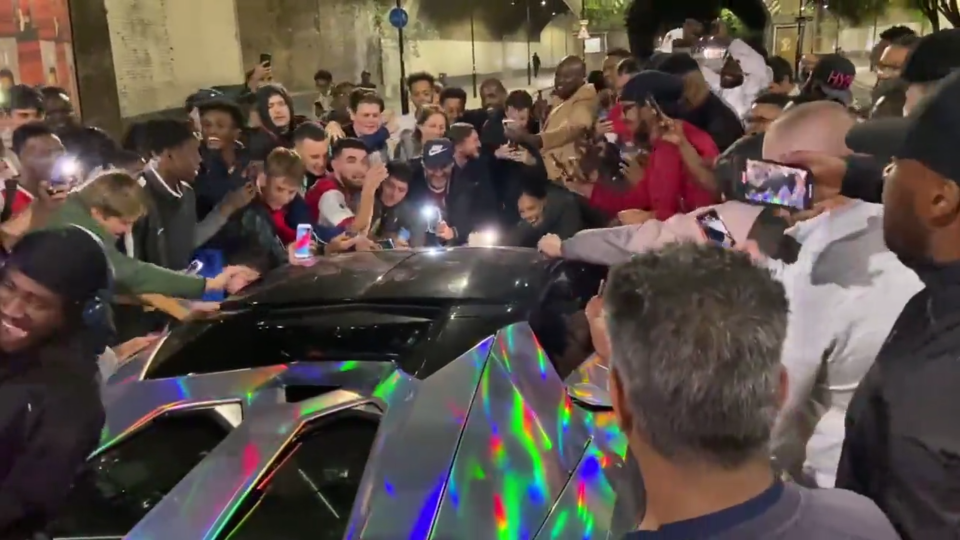 Pierre-Emerick Aubameyang regained hero status among Arsenal fans by netting a brilliant goal in the 3-1 victory over Tottenham.

Remember he was dropped for this fixture after getting stuck in traffic and turning up late last season?

Well, the Gunners captain got stuck in his car once again this time, but for very different reasons.

Arsenal fans were seen mobbing his vehicle after the north London derby triumph.

The 32-year-old is well-known for his love of supercars, making him quite easy to spot on the streets of north London.

Spurs struggled to get anywhere near him on Sunday, though.

Aubameyang netted a stunning breakaway goal in between strikes from Emile Smith Rowe and Bukayo Saka as Arsenal raced into a three-goal lead before half-time.

Heung-Min Son pulled one back, but it was just a consolation as the Gunners claimed bragging rights over their fiercest rivals.

Speaking afterwards, Aubameyang said: “It means everything, it means the world. We gave everything for the fans, they pushed us.

“I can’t describe it, it’s an amazing feeling when you are a player. To have the fans like this is really unbelievable.”

He added: “We are on a good run of games now. After the game against City it was time to have a chat between the players and that’s what we did.

“We want to go forward and win games. This was important for us to make things clear and I think we’re doing well and the feeling is very good.”