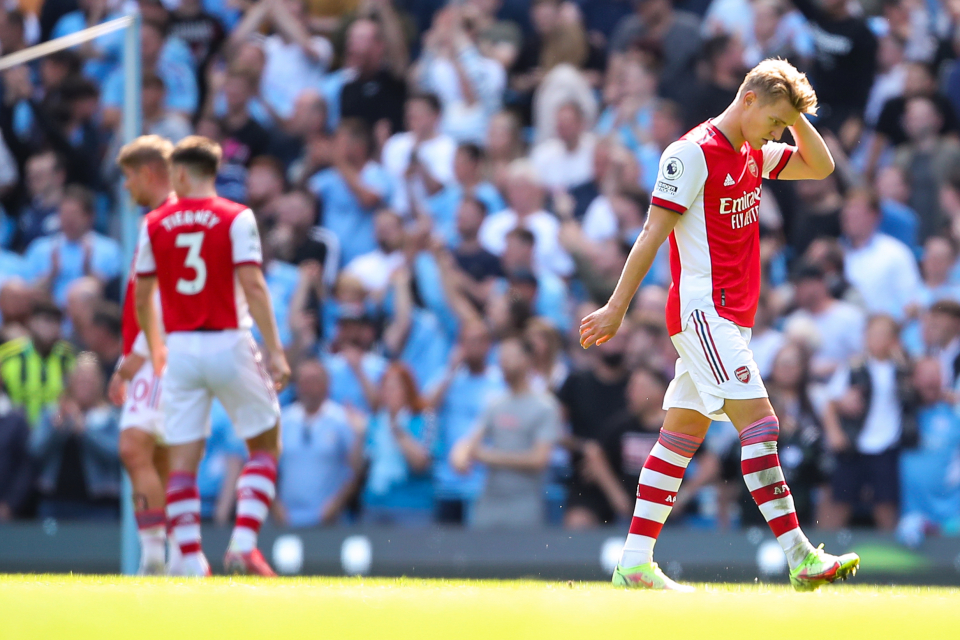 Arsenal’s start to the season went from bad to worse as they put in a hapless performance to lose 5-0 against Man City on Saturday.

Pressure was already high on Mikel Arteta after disappointing defeats to Brentford and Chelsea, but a mauling at the Etihad will raise further questions.

The Arsenal defence was carved open with ease as Ilkay Gundogan and Ferran Torres put Pep Guardiola’s side two ahead early on.

Granit Xhaka’s first half red card made it an insurmountable task as Gabriel Jesus and Rodri both got themselves on the scoresheet to pile on the misery.

City claimed the lead after just seven minutes with Jesus clipping in a superb cross from the right which was powerfully headed in at the back post by Gundogan.

Arsenal goalkeeper Bernd Leno did get his hands to the ball but could not keep it out.

City doubled their advantage five minutes later as Torres was on hand to tuck home after the ball was lobbed into the area by Bernardo Silva.

Things went from bad to worse for Arsenal when Granit Xhaka was sent off after 35 minutes.

Jesus made it 3-0 to City just before half-time. Jack Grealish cut into the box and picked out the Brazilian, who took a touch and then slipped the ball past Leno.

Arteta was criticised for his failure to make changes that inevitably led to more goals.

City did not ease up after the break, adding their fourth goal within eight minutes of the restart.

Rodri was the next name to get on the scoresheet, side-footing a shot into the bottom corner from 25 yards with excellent placement.

Torres made it 5-0 to City as he glanced in a header off the post from a Riyad Mahrez cross six minutes from time to pile on the misery.

Arsenal are still to score this season and sunk to the bottom of the table.