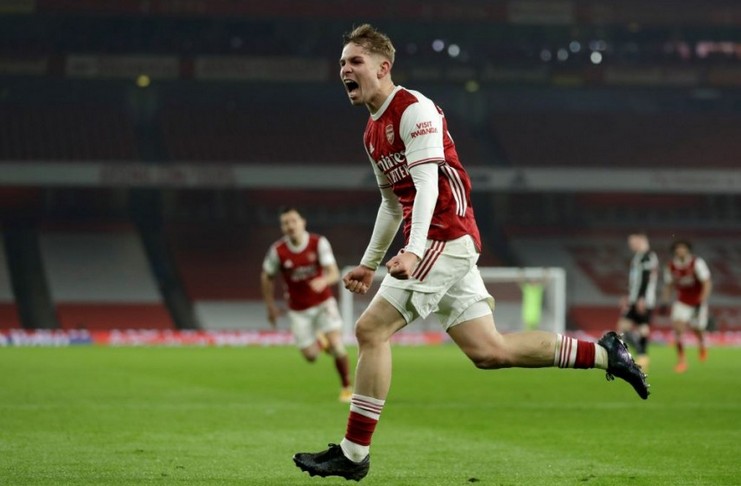 Arsenal started their FA Cup defense against Newcastle fielding a mix of starters and benchwarmers, as Mikel Arteta looked to rotate his tiring troops.

What is striking is that two of those first-teamers’ combined ages comes to just 39.

19-year-old Bukayo Saka broke into the Gunners’ starting line up last year originally due to his outstanding Europa League performances. Stepping up to the Premier League was a breeze for him, where he was asked to play a variety of positions ranging from right forward to left-back.

After signing a new contract in the summer, the number 7 has now become instrumental in Arsenal’s upturn in the form.

🏆 Player of the Month
🥇 Goal of the Month@BukayoSaka87 🤝 December pic.twitter.com/WpRUNfQTCF

The other half of that duo is the emerging Emile Smith Rowe, the 20-year-old, who like Saka, developed through Arsenal’s Hale End Academy.

It’s been a slower process to the first team for the roaming midfielder. His first-team debut came all the way back in 2018, in a Europa League group stage game against Vorskla Poltava. By January 2019, he was sent out to RB Leipzig on loan, but he was unable to make any kind of impact due to injury.

The Last season he was again seen in different colours, this time closer to home at Huddersfield Town, where he played the second half of the 2019/20 season. In the penultimate game of the Championship, Smith Rowe all but saved the Terriers from relegation to League One, slotting the winner in a 2-1 victory over promotion-chasing West Brom.

This season, Arteta opted to keep the youngster at the club, revealing back in August his excitement about what the Croydon-born player can bring.

We felt that celebration.

“He’s a player with very specific qualities to play in those pockets in that position as an attacking midfielder. I am excited to work with him. I have been talking with him and I have followed him during his spell on loan. Not only that, but I think he’s someone who can be pretty impressive. Furthermore, I’m pleased by what I’ve seen from him.”

Until late November though, Smith Rowe had to wait for any first-team action this season. Sidelined early on in the season with a shoulder injury, it was only in the latter games of Arsenal’s cruising Europa League campaign did he begin to show why he was kept at the club.

After bagging two assists and a goal in just 129 minutes of Europa League play, and with Arsenal’s woeful Premier League form dragging into Christmas, Arteta gave the youngster a chance to show his worth in the Boxing Day derby against Chelsea.

Saka scored the third (did he or didn’t he mean it) goal in the3-1 victory, but it was his fellow Hale End product Smith Rowe who assisted him. That was nothing though compared to the Arsenal-of-old goal the duo combined on in the 4-0 demolition of West Brom just five days later.

Linking up with Alexandre Lacazette, the two created a goal that gave Gunners fans flashbacks of prime Wengerball, with Smith Rowe again teeing up Saka for a simple tap in.