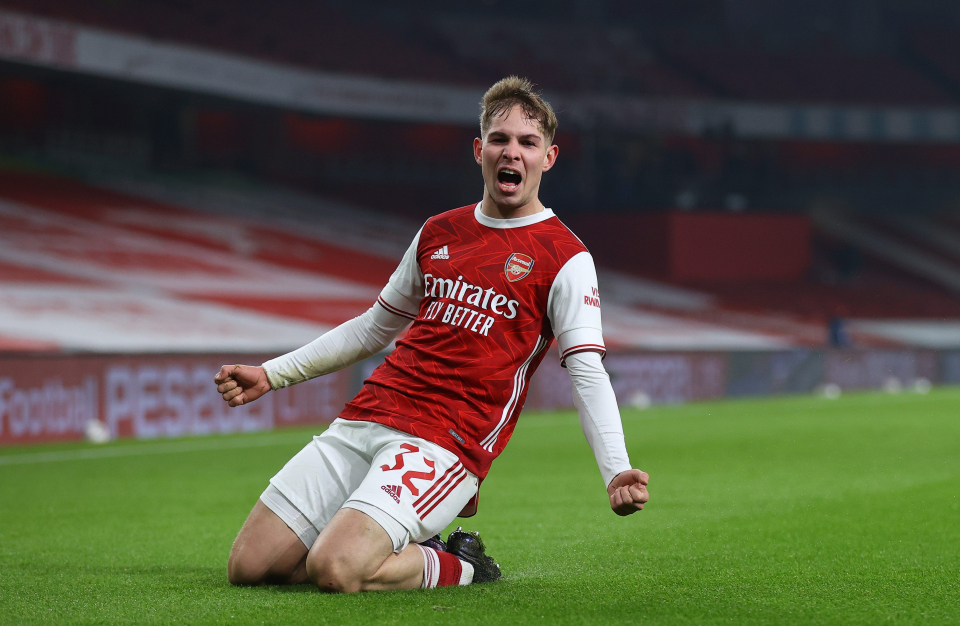 Emile Smith Rowe was Arsenal’s hero as his extra-time strike helped them secure a 2-0 win at home to Newcastle in the FA Cup.

The ‘Croydon De Bruyne’ drilled the ball in-off the post to break the deadlock before Pierre-Emerick Aubameyang added another in the closing stages.

However, the tie was shaping up to be much worse for the holders than it turned out to be, with Smith Rowe being shown a red card just before the end of normal time.

It came after Sean Longstaff was felled by Smith Rowe, who was promptly sent off by referee Chris Kavanagh before VAR came to his rescue and the decision was overturned.

This was moments after Andy Carroll missed a glorious chance to win it in stoppage-time but Bernd Leno was equal to the Newcastle frontman’s effort.

There was a setback for the Gunners before the tie even started, with Gabriel Martinelli withdrawing from the team aftersustaining a nasty-looking injuryduring the warm-up.

It was the visitors who enjoyed the better of the play in the opening exchanges and although Aubameyang forced the returning Martin Dubravka into an excellent save midway through the half, he would have been deemed offside by VAR.

A better chance was created soon after by Kieran Tierney, but Reiss Nelson decided to control his cut-back and the opportunity went begging.

While Arsenal began to dominate, they still struggled to penetrate an organised Newcastle back five though Carroll was required to make two timely clearances from dangerous balls into the area before half-time.

Following a lacklustre first 45, when captain Aubameyang touched the ball only 18 times while playing in his favoured central position, it was a surprise to see the away side make the first change.

Skipper Jamaal Lascelles, who made his first appearance since November 21 after recovering from coronavirus, was replaced by Matt Ritchie and the substitute slotted in at left wing-back.

David Luiz’s clearance was poor and Jeff Hendrick’s scuffed shot came to the Magpies forward, but he side-footed past the post from six yards and Smith Rowe was finally able to enter the fray.

Arsenal should have broken the deadlock on the hour mark, but Aubameyang again did not have the Midas touch in front of goal and poked wide with only Dubravka to beat.

Newcastle’s goalkeeper was making his first appearance of the season following a heel injury and was required minutes later to keep out Joe Willock’s close-range header.

It was the midfielder’s last involvement following a double substitution with Bukayo Saka and Granit Xhaka introduced and the changes worked, with Aubameyang more prominent, but Bruce’s side almost clinched victory at the end of the 90.

With results decided on the day at this stage of the competition, both teams pushed for a winner and a quick break by the visitors saw Elliot Anderson’s shot fall for Carroll and yet Bernd Leno saved well and bravely pushed away the loose ball before the forward could score the rebound.

The stoppage-time drama was not over, with substitute Smith Rowe shown a red card for a high tackle on Sean Longstaff – but referee Chris Kavanagh downgraded his decision to a yellow after he used the pitchside monitor.

Xhaka forced Dubravka into a wonderful save from his fierce volley early in the first half of extra time before the opener arrived.

Arteta saw three of his substitutes combine, with Saka involved before Alexandre Lacazette headed into Smith Rowe’s path and the playmaker fired into the bottom corner.

There was still time for Aubameyang to grab only his sixth of the season eight minutes later when he tapped in Tierney’s centre to send the holders into the fourth round.