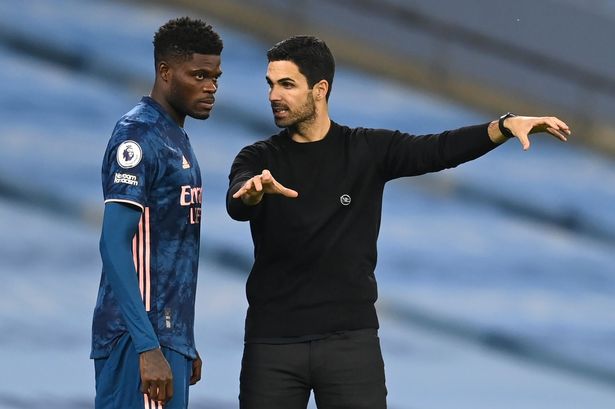 Arsenal manager, Mikel Arteta, has praised Thomas Partey for his cameo display in his side’s one-zero defeat to Manchester City on Partey’s debut as an Arsenal player.

After the 27-year-old’s 45m pounds move from Atletico Madrid to the London club on transfer deadline day, he needed just one training session to be subbed in on the 83rd minute.

Arteta said they will see how to fast-track his integration into the team though, he must follow the gradual easing in process that all players follow.

“When he came on, he looked good”, the 38-year-old tactician said at his post-match interview.

“We will see how quickly we can make it with him, but as well we have to respect that process and that time for him because he only trained a day really with us.

“It’s a lot of new information – it’s a completely different game model for him to understand. We have to respect a little bit of that.”

The game was decided by a 23rd minute Rahim Sterling close-range finish, with both teams getting decent chances to have scored more goals.

Partey will look to make his full Arsenal debut when they take on Austrian side, Rapid Vienna, on Thursday in the Europa League group stage or on next weekend’s Sunday Premier League clash with Leicester City at the Emirates stadium.