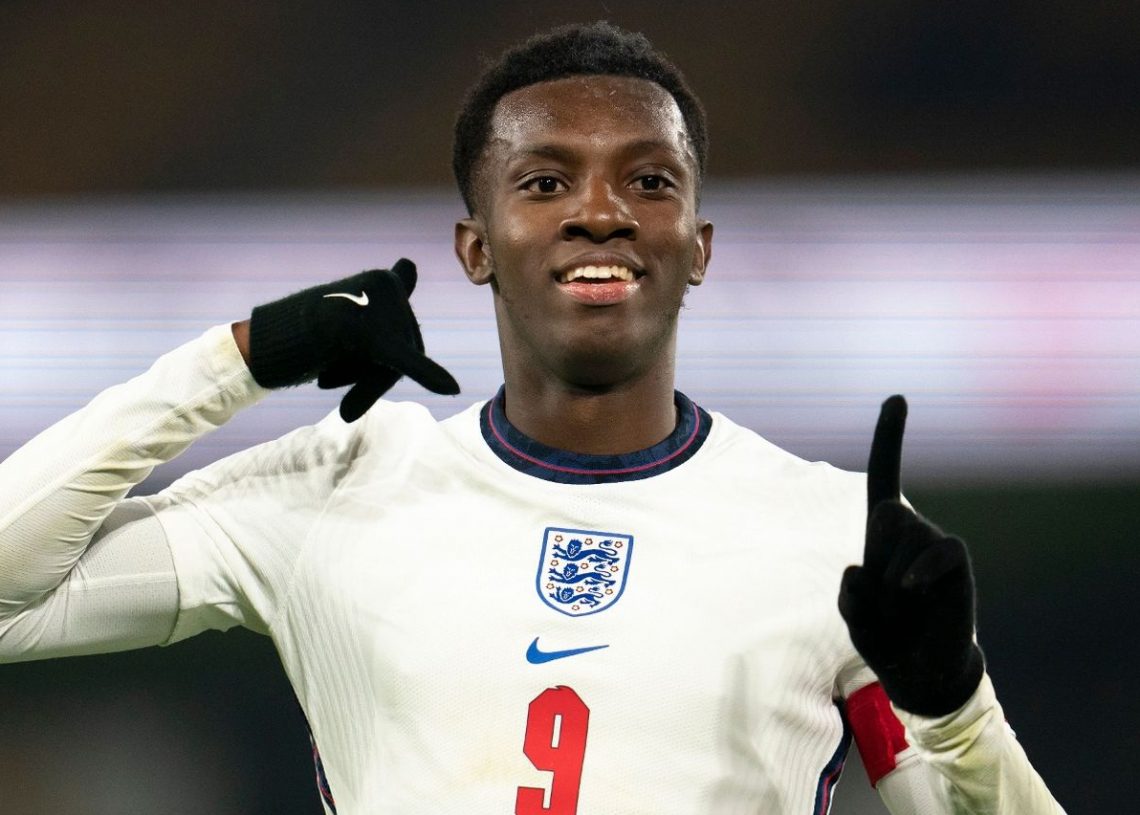 Share on FacebookShare on Twitter
The Gunners’ striker surpassed the mark he had shared with Alan Shearer and Francis Jeffers prior to Tuesday’s match against Turkey.
Arsenal forward Eddie Nketiah has become the all-time top goalscorer for England’s Under-21 side with his strike against Turkey on Tuesday.

Nketiah scored in the 88th minute of the U21 European Championship qualifier at Molineux Stadium, giving England a two-goal advantage in a game they would eventually win 2-1 after a late Turkey consolation.

The goal was Nketiah’s 14th for the Young Lions, as he surpassed the record he held alongside Alan Shearer and Francis Jeffers.

“To beat the record and be alongside those kind of names and players is a dream come true and a proud moment for me and my family.”

With the win, England booked a group-stage spot at next year’s U-21 European Championship, which will be co-hosted by Hungary and Slovenia.

Prior to the match, England U21 head coach Aidy Boothroyd tipped Gunners striker Nketiah for big things in the future, saying that the forward has “an aura of responsibility and leadership”.

“There’s no doubt about it. He’s destined for big things,” Boothroyd said. “His personality and his persona around the lads, he has an aura of responsibility and leadership about him.

“He’s a natural, all the players like and respect him. We know what he gives on the pitch, but he’s good off the pitch. This is what we want our young England players to look like.

“How far can he go? He’ll have to play regular games for his club.”

The 21-year-old has been working his way up the Gunners’ depth chart upfront, making seven total appearances so far in 2020-21 and scoring two goals. He has, however, has only started one of Arsenal’s four Premier League games.

After a strong first half of 2019-20 on loan at Leeds United, Nketiah returned to the Gunners in the second half of last season and quickly established himself as a first-team regular.

The forward scored twice in the Premier League last term, starting seven of his 13 appearances.

Boothroyd added that he believes Nketiah can go far in his career, comparing him to two England greats past and present.

“He’s got work to do, and he’ll be the first person who will tell you that. But he can do really well. There are always comparisons with top players over generations. You look at the career that Alan [Shearer] had and Harry Kane, who is our England captain now,” Boothroyd said.

“If Eddie can get to that point where like those two players, he’s in on goal, and you know he’s going to score consistently, that’s when you make that step from a young player to a senior player.