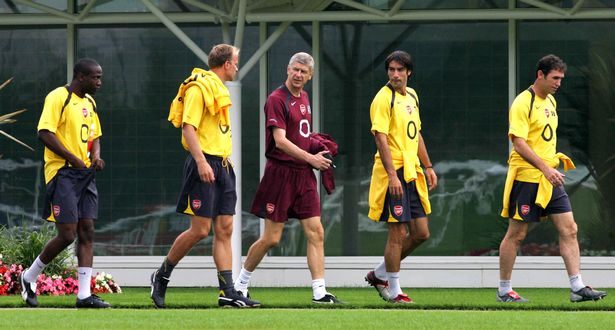 Arteta replaced Unai Emery in the Gunners hot seat and has been praised for bringing a more attractive style of football back to the Emirates Stadium.

He has led Arsenal on an eight-match unbeaten run in the Premier League and to within five points of a Champions League place with a game in hand.

And club legend Bergkamp has identified the changes Arteta has made to bring about an upturn in form.

“In that game it was clear to see what his intentions were with the team. The front four would chase the ball and put pressure on the opponents, but the midfield stayed behind. There was a big hole.

“I don’t know if you remember the AC Milan of Arrigo Sacchi, with Marco van Basten, Ruud Gullit and Frank Rijkaard. In training, they’d have ropes between them, so the distance between the players was always similar on the pitch.

“That was fantastic in our team as well. There was always a connection. There were no holes.”

When asked by fellow Arsenal ‘Invincible’ Keown whether player positioning is an area Arteta needs to hone his tactics, Bergkamp replied: “He’s working on it, but it needs time and maybe different players.

“Slowly you can see them trying to play a possession game.

“Everyone on the ball has three options, triangles on the pitch. It’s much better than before.

“But it’s a different culture which will take time. You have to put the hours in, like how we did with Arsene.”

Arsenal will return to action against Manchester City as the Premier League returns on 17 June.