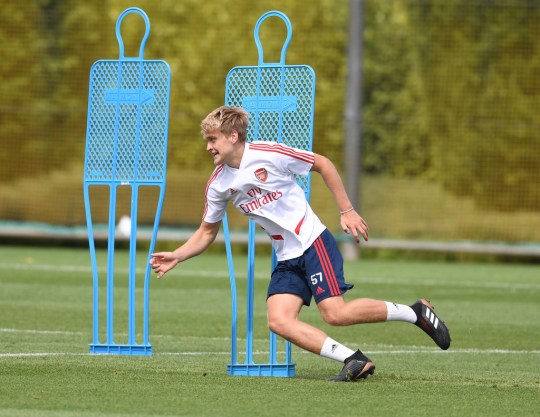 Academy stars Matt Smith and Trae Coyle have stepped up to Arsenal’s first-team training ahead of the restart of the 2019/20 season. The Premier League aims to resume action on 17 June and Arsenal’s first game is expected to be against Manchester City on the first night of games.

Smith, 19, is a midfielder who will be hoping to make his first appearance for the senior team before the season ends.

Coyle is also 19 years old and has played much of the season in the academy on the right wing. The London native is also waiting for his debut for Arsenal and he and Smith were pictured in training with the first-team.

With increased injuries expected to be a concern for clubs when the season restarts, Arteta may be forced to call more often on his youth stars.

Arsenal are facing a difficult transfer window due to the financial difficulties caused by the coronavirus pandemic and Arteta will be expected to rely more heavily on emerging talent from the academy.

The Gunners have not played since March 7 when they beat West Ham 1-0 at the Emirates. Arteta’s side sit ninth in the league table and haven’t given up hope they can launch a late assault to secure a Champions League spot for next season.