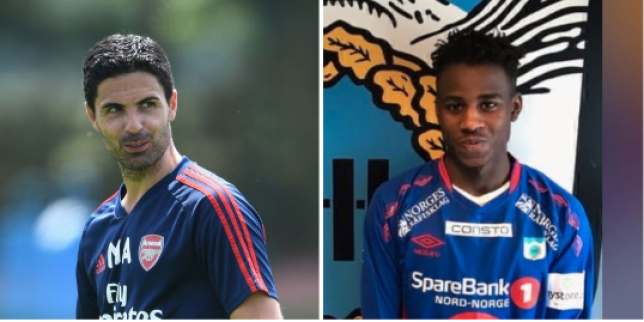 Arsenal are have completed the signing of free agent George Lewis, according to reports in Norway. The 19-year-old impressed during a trial earlier this year and is now set to join the north London club’s Under-23 squad.

Lewis, a skillful and pacey winger, has spent the last few years in Norway’s lower leagues turning out for the likes of Tromso IL and Tromsdalen. Born in Kigali, Rwanda, Lewis spent time with Ipswich last year but is said to have impressed Arsenal coaches with his versatility when he trained alongside the club’s youngsters back in March.

Arsenal had been on the verge of completing a move for the player who turns 20 next month and VG in Norway have now confirmed the deal has been finalised.

Lewis is not the only youngster Mikel Arteta is hoping to recruit, meanwhile, with the Gunners boss also driving a move for PSG youngster Adil Aouchiche. The 17-year-old has already made three senior appearances for the French champions this season and the attacking midfielder is regarded as one of Ligue 1’s outstanding talents.

Lille and Saint-Etienne have already held talks with his representatives but his salary demands are proving a major stumbling block, which could present Arsenal with an opportunity to pounce. Aouchiche is said to be demanding a €4million signing on fee and wages of €25,000-a-week, while his family are reported to be encouraging him to leave PSG in search of regular first team football at a major European club.