Arsenal ready to battle for Willian 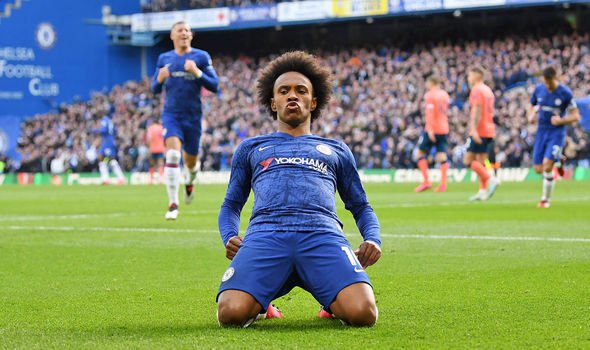 According toLe10sport, Chelsea midfielder Willian will not renew his current contract at Stamford Bridge alerting a number of clubs, including Arsenal, to his availability on a free deal this summer.

Paris Saint Germain and Manchester United are also said to be keeping tabs on the 31-year-old Brazil international who is on the hunt for one last big payday in Europe.

Willian has made over 300 appearances for the Blues since signing in 2013, scoring 58 times and making 58 assists in a spell that has seen him collect two Premier League medals, the FA Cup, League Cup and Europa League.

Any Arsenal interest is likely linked with the fact that he’s represented bySports Invest UK; run by Kia Joorabchian, a close associate of our technical director Edu.

Joorabchian’s relationship with Edu, ongoing since the latter took a boardroom role at Corinthians, has already helped Joorabchian place David Luiz and Cedric Soares at Arsenal in the last seven months. PSG’s Layvin Kurzawa, also linked in January, is another of his clients.

The Iranian-born businessman is a long-standing Arsenal fan and watched yesterday’s win over West Ham from the directors’ box. Edu’s daughter even captured him celebrating Lacazette’s goal with vigor.

Throughout his time in charge, Arsene Wenger seemed to go out of his way to avoid doing business with Joorabchian and other ‘super agents’. That has now changed.

While the Gunners continue to put an emphasis on global scouting, there’s no hiding that contact books have been increasingly important in recent windows.

Pablo Mari’s arrival from Flamengo in January was smoothed by Raul Sanllehi’s relationship with his agent and our Head of Football’s links with Lille’s president Gerard Lopez and Sporting Director Marc Ingla also helped us get the Nicolas Pepe deal over the line – with some help from middleman Jorge Mendes who earned a significant fee for his part in the deal.