There is less than a minute of stoppage time remaining at the Emirates Stadium and Arsenal have a corner. This is surely their last chance to find a winning goal against Sheffield United. But there is a problem. Gabriel Martinelli is down in some discomfort and doesn’t look like getting up.

The frustration in the stands is palpable. A delay is the last thing Arsenal need right now. But the groans give way to cheers when an irate David Luiz sprints over to his young countryman and hauls him to his feet, reminding him of the urgency of the situation and ordering him to carry on.

In the end, the corner did not provide the winner Arsenal needed. But the events which preceded it highlighted Luiz’s growing status in the team. When it was all over, he could be seen walking off the pitch with his arm around Martinelli’s shoulder. No hard feelings. Just a valuable lesson learned.

Luiz was not wearing the captain’s armband on Saturday. That was given to Alexandre Lacazette in Pierre-Emerick Aubameyang’s absence. But the 32-year-old is fast becoming Arsenal’s true leader under Mikel Arteta.

“That’s what I wanted to demand of him,” said the Spaniard earlier this month. “He is a player that has won more trophies than anybody else in the dressing room and we have to use that in a very powerful way. I wanted him to step up. I wanted him to put all his qualities, his personality and experience towards the team and he has made a big step forward.”

Sheffield United’s equalizer on Saturday was another reminder of Arsenal’s ongoing defensive issues. Arteta was without two senior full-backs for the game, while Sokratis had joined Calum Chambers on the sidelines and Rob Holding and Hector Bellerin were not deemed ready to start.

Despite having four different centre-back partners in six games, however, Luiz is beginning to look more like the player who won the Premier League title at Chelsea rather than the one dropped by Freddie Ljungberg following a haphazard start to his Arsenal career. The Brazilian is the only player to have played every minute since Arteta’s appointment.

He could be seen cajoling his team-mates and organizing Arsenal’s shape throughout Saturday’s game. But it is not just leadership and experience that he is bringing to the side. Luiz has always been more comfortable in possession than out of it, and one of Arteta’s early tactical initiatives has been to harness his ball-playing ability more effectively. 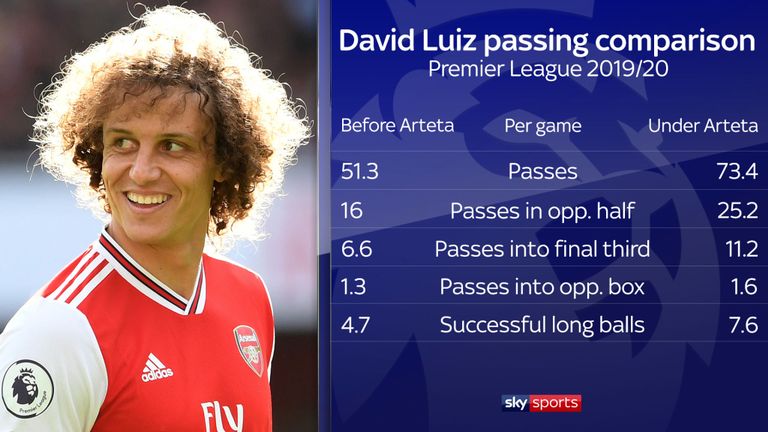 It can be seen in the statistics. Arsenal’s possession rate has not risen under Arteta – in fact, it has dropped from 55 percent to 53 percent – but Luiz is seeing considerably more of the ball than before, averaging 73 passes per game compared to 51 per game previously.

It is a dramatic increase and it is not by accident. While Unai Emery previously put the onus on Granit Xhaka and Matteo Guendouzi to find a way through opposition lines, Arteta is instead using Luiz, whose range of passing has long been considered one of his best attributes.

As a result, the number of passes Luiz is sending into the final third has nearly doubled. His total of 56 since Arteta’s appointment far exceeds any other Arsenal player. In fact, only three players in the rest of the Premier League – Chelsea’s Jorginho, Liverpool’s Trent Alexander-Arnold and Wolves’ Romain Saiss – have made more in the same timeframe.

Where previously he would hold his position, Luiz is now being encouraged to step out of the defense with the ball at his feet in order to find gaps further up the pitch. Arsenal’s central midfielders are then tasked with dropping back to provide defensive cover behind him.

It could be seen in Arteta’s very first game in charge, away to Bournemouth on Boxing Day, when Luiz’s defense-splitting pass sent Lacazette through on goal shortly after Aubameyang’s equalizer in the second half.

Lacazette was unable to convert that opportunity, with Aaron Ramsdale’s save denying Arsenal a potential victory, but Luiz set up a goal in similar circumstances against Crystal Palace two weeks later, this time picking out Mesut Ozil in a pocket of space between the lines, allowing the German to combine with Lacazette, who provided the assist for Aubameyang.

At other times, Luiz has been encouraged to use his long-passing ability to help Arsenal progress up the field.

His raking diagonal passes were a feature of the 2-0 win over Manchester United on New Year’s Day, and the same tactic was apparent against Crystal Palace when Luiz completed 15 long passes – nearly twice as many as in any game under Emery or Ljungberg this season – to launch a succession of attacks down Arsenal’s left flank.

Luiz’s role in Jordan Ayew’s equalizer in that game at Selhurst Park was a reminder that he is still prone to defensive lapses. Saturday’s meeting with Sheffield United, meanwhile, showed his passing from deep is less effective against a well-organized opponent who leaves no spaces in central areas.

But what’s also clear is that, by playing to his strengths, Arteta is getting far more out of Luiz than his predecessors managed. The new head coach has praised his attitude and talked up his “desire to learn”, while Luiz, for his part, has said Arteta will become one of the best coaches in the world.