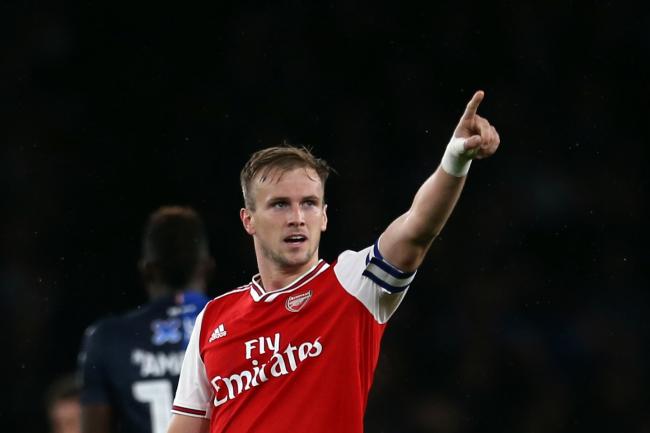 Rob Holding is looking for “closure” as he prepares to make his Premier League comeback at Manchester United – the place where he suffered a serious knee injury nine months ago.

The 24-year-old was enjoying a fine run of form at the heart of Unai Emery’s defense before he ruptured knee ligaments in a 2-2 draw at Old Trafford last December.

Having worked his way back to fitness, Holding made his comeback as he captained the Gunners to a comfortable Carabao Cup third-round win over Nottingham Forest – even scoring in the 5-0 victory.

But his return to top-flight football looks set to come at Old Trafford as he pushes fellow centre-backs Sokratis Papastathopoulos and David Luiz for a starting berth.

“It will be coming full circle,” he said.

“Even if I am on the bench it will be brilliant to just walk back to that spot that it happened and just sort of taking it in and have a bit of a moment.

“Then it will be business as usual. But I couldn’t really write it any better.

“I suppose you could say it is a bit of closure for it to happen there and then your first game involved is back there. It will be interesting, but I look forward to it.”

Holding is one of three defenders who returned from injury against Forest, with Hector Bellerin back following a similar knee problem and Kieran Tierney making his debut after overcoming a groin issue that had plagued him since joining from Celtic in the summer.

In their absence, Emery has struggled to find a formula at the back to keep out the opposition and Arsenal have kept just one clean sheet in their last 11 league games.

Holding admits that, while he has been recovering, there has been an exterior pressure building up to his comeback as fans hope he can be part of the answer to Emery’s defensive conundrum.

“I was speaking with Kieran – we were saying there is actually a bit of pressure on me, Hector and him,” he said.

“Obviously the fans have been putting a lot of pressure on saying: ‘We need those three back, hopefully, they can perform’.

“So we had a bit of pressure going into [the Forest game] and the way we performed and dealt with it was great.

“It is a healthy pressure. It’s not a sort of draining pressure if you know what I mean. It is a nice pressure and it is the competition. It is pushing everyone to be better.”

Holding also revealed he was left in tears when team-mate Bellerin suffered the same injury as him just days after he started his own rehabilitation on his knee.

From the bike, to the gym, to the first runs and now back on the pitch together 🙌🏼 @RobHolding95 pic.twitter.com/Xw6eh9tR1u

Asked if he cried when Bellerin got injured, the former England U21 international added: “I did.

“I was sat with my girlfriend and I saw the video from TV in the group chat with my friends.

“I thought ‘oh no’. Because it was so raw for me it hit a spot and I got a bit emotional with it.

“I was two weeks post-op when he went down, I was sat up here watching the game and it was really emotional for me to see him go down, getting stretchered off and holding his knee.

“The long days in the gym where we’ve been sat on a watt bike just ticking over for 30-40 minutes, there have been some dark times. For us to both come out and put in a performance like that [against Forest] and for him to come on and get an assist straight away is a real pleasure to see. He’s a great leader for the team.

“It happened so close together. For it to both be left knee, a weight-bearing knee for us. To go through the process with him made it a lot easier and I’m sure he’d say the same.”