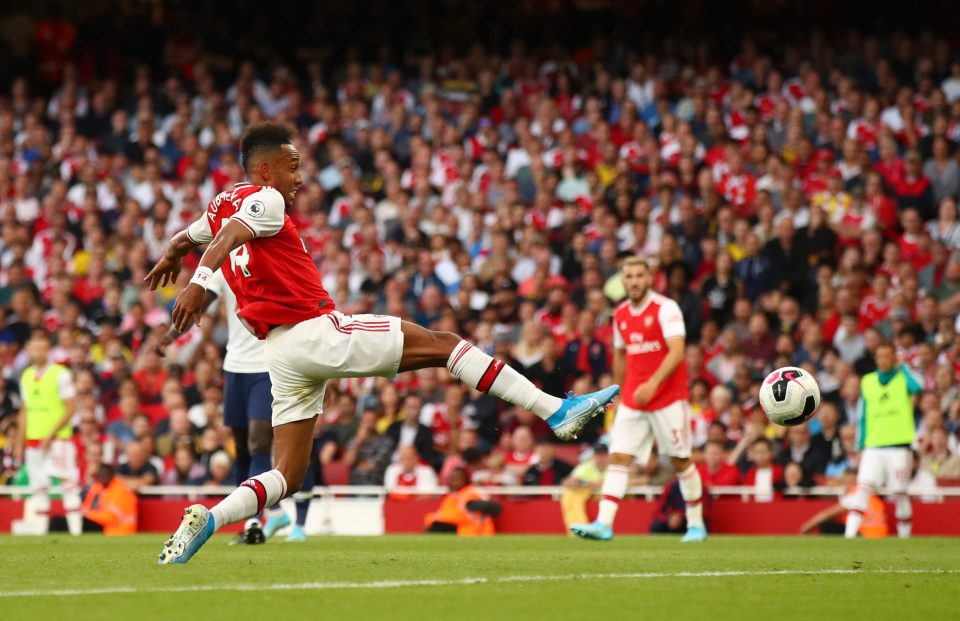 Arsenal came back from two goals down against Tottenham to draw 2-2 in a pulsating north London derby on Sunday.

Christian Eriksen and Harry Kane had given Spurs a comfortable lead before Alexandre Lacazette and Pierre Emerick-Aubameyang pegged their rivals back.

Spurs have not won a league game at the Emirates Stadium since November 2010, but appeared on course to break that duck after Eriksen’s 50th Premier League goal and Kane’s penalty – his 10th goal in his last 10 games against Arsenal – put them in prime position to do so.

But, after mistakes from Bernd Leno and Granit Xhaka had left them vulnerable, Unai Emery’s Gunners fought back, Lacazette pulling one back in first-half stoppage time before Aubameyang equalized in a frenetic second half.

Neither side had a particularly good day defensively, despite Jan Vertonghen making his first appearance of the campaign for Tottenham, with boss Mauricio Pochettino shifting Davinson Sanchez to right-back after last weekend’s shock defeat at home to Newcastle.

Arsenal also went into the game on the back of a loss, at Liverpool, and Emery responded by starting Aubameyang, Lacazette and big-money summer signing Nicolas Pepe together for the first time.

The hosts enjoyed plenty of the ball in the opening stages, Pepe, in particular, looking sharp whenever in possession, but they could not force Hugo Lloris into any meaningful work.

In contrast, Tottenham was ahead from their first genuine attack as Eriksen was on hand to tap home from point-blank range after Leno could only push Erik Lamela’s shot into the feet of the Dane, who has been heavily linked with a move away from Spurs before Monday’s European transfer deadline.

The visitors were close to doubling their lead before the half-hour mark, David Luiz allowing Heung-min Son to run through at goal and unleash a curling effort that Leno did brilliantly to tip behind.

Pepe – the brightest of Arsenal’s attacking trio in the first half-hour, bent a free-kick wide before Leno again failed to hold a fairly routine strike, this time only pawing Kane’s effort into Son before his cross was cleared.

As he did with his error for the goal, Leno soon made amends as he dived full stretch to save an Eriksen free-kick.

There was nothing he could do moments later when Spurs were awarded a penalty – Xhaka steaming in recklessly and diving in to challenge Son after the ball had gone.

Kane stepped up and continued his fine goalscoring record in the derby by smashing the spot-kick home to double the lead.

Lloris saved from Pepe but Lacazette, quiet by his standards in the opening 45 minutes, lashed home from six yards to half the deficit on the stroke of half-time.

Arsenal again started the half on top but was reliant on a fine, low save from Leno to deny Son, with Lloris equalling his counterpart to push a Matteo Guendouzi strike behind.

Sead Kolasinac could not make telling contact as the resulting corner dropped his way and Lacazette sent a speculative effort wide with the hosts rallying for a leveler.

In an end-to-end contest, Kane rattled the inside of the post with a fine bending effort – but Aubameyang then drew Arsenal level with 20 minutes remaining as he prodded home Guendouzi’s perfectly weighted through ball.