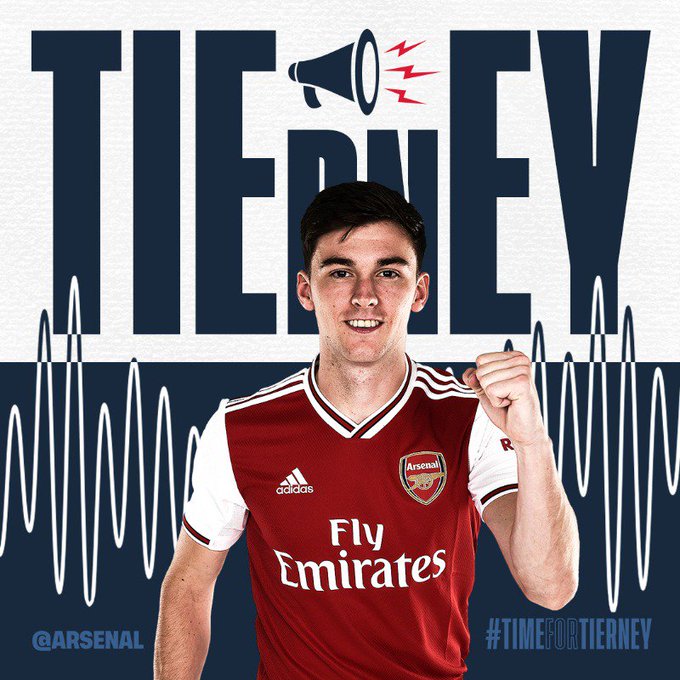 Arsenal has reached an agreement of £25m with Scottish club, Celtic for Kieran Tierney.

The Gunners’ interest in the left-back has been known for a while now as two bids of £15m and £25m were all turned down by the Scottish champions as it contained too many add-ons and was dependent on Arsenal’s qualification for the Champions League.

The defender has signed a five-year contract and will earn £75,000 a week as he moves to the North London based club.

The 22-year-old has been at Celtic since he was seven years and has come through the youth ranks of the Scottish giants.

The 22-year-old, who has won five Scottish Premiership titles, made 40 appearances in all competitions for the Hoops during the 2018/19 campaign

The left-back despite his young age has already captained The Celts and the Scotland national team.

The deal for Tierney is Unai Emery’s fifth signing of the summer window.

The Gunners have completed the signing of William Saliba, Dani Ceballos, Nicolas Pepe, and David Luiz.

Unai Emery said: “We’re delighted Kieran is joining us. He’s a very talented player who will continue to improve. He increases our options defensively and I look forward to him joining our group.”