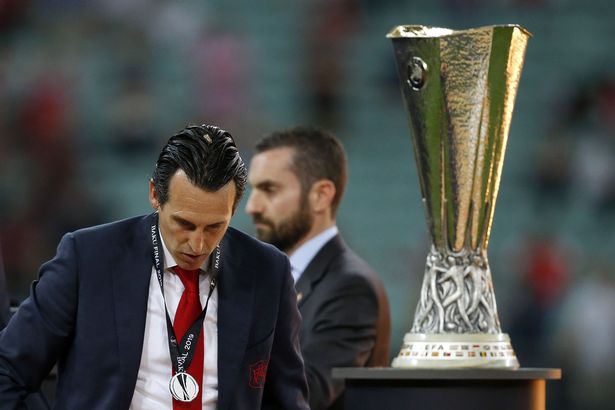 Unai Emery and his team have been left in dispair as Chelsea battered them in Europa League finals in Baku.

The first half performance was good as Arsenal and Chelsea played to a half with no goals. The Gunners were however impressive as they had more shoots on targets.

However the story changed completely as Giroud, Pedro and Hazard who found the back of the net twice saw Chelsea through although Alex Iwobi pulled on back in the game.

In a night to forget for Cech who played his last career game against a club he spent the majority of his playing time at.

The following are the ratings of the players who featured for Arsenal in the finals:

Did himself a good work in the first half of his final game, saving impressively from Olivier Giroud’s low drive. The Czech international could do little he watched his former team-mate beat Laurent Koscielny to a near post cross before picking up the ball in his net.

One could only feel sympathy for him as it’s his last game and he could’ve done better with other goal so he conceded. 5

Sokratis Papastathopoulos: There were a couple of nervy touches from the in the early parts of the game and though he calmed down after a while he was not the composed presence Ainsley Maitland-Niles needed when Hazard started threatening. Although the better defender of the three back deployed by Unai Emery, he didn’t serve a greater force to stop the attacks of Chelsea. 4

The clubs captain was perhaps guilty of giving Giroud too easy a time and space to flick in the opener and offered little leadership as Chelsea began to be ruthless. 4

Did too little in the game as he gave Pedro plenty of space in the game. He lacked the pace to cover quickly anytime Pedro was at it on him as Kolasinac did himself no good in the finals. Monreal worked hard as ever but tonight proved he simply isn’t up to the standard required to take on Champions League opponents in the future. 4

The youngster going forward will be playing a major role in the club as he tried his best in the defeat against Chelsea. He was often too exposed by Emerson as he the Brazilian crossed in for Giroud to head home the lead for the Blues. He was nervous anytime Hazard paced on him and clumsily gave away the penalty which was converted by Hazard. 3

Shambolic crossing wasted so many of Arsenal’s best chances, particularly one occasion when an intelligent pass from Xhaka had given him the space to do more. He was far away from his best in the defeat. 3

It was surprising Torreira was among the first to make way in a game where he left you wanting more. He won a few tackles but against an injured N’Golo Kante he could really have taken control of this game and given more cover to the back three. 4

Arsenal’s best player in the final. An imposing performance from Xhaka but was not enough. His probing of the space in behind Cesar Azpilicueta on the left giving Sead Kolasinac a string of chances to provide better crosses than he did. He also tested Kepa in the first half as his shot was just inches away from scoring. 6

A lot of questions has been asked of the German all season. Unai often benched him but was picked to start ahead of Iwobi and he did himself no good as he proved his critics right. He was never up to the task in disposing off Jorginho and often nowhere to be found.

He was substituted too late in the game he did little in the match. 3 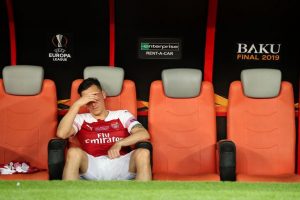 He was denied what appeared to be a clear penalty and was otherwise left to feed on scraps. His performance sums up the little creativity in the midfield of Arsenal as no one was creative enough on a day it was needed most. 4

Pierre-Emerick Aubameyang: The Gabon striker had perhaps the best chance of the first half when he volleyed Kepa’s clearance wide of goal taking into he seemed to have time to set himself. After that miss, there were darts in behind but little to do as no service and very little creation left him in isolation, his losing of the ball in the build-up to the fourth goal typifying a wasteful game. 3

Alex Iwobi (sub, Torreira, 67′): A stunning volley moments after his introduction was the only moment that Arsenal fans will cherish from this forgetful trip to Baku. His all-around display suggested he ought to have played ahead of Ozil. 6

Made no serious impact in a game that was over moments after his introduction. 4

Joe Willock (sub, Ozil, 77′):Certainly one for the future for the club. A substitution that should have been done earlier. Willock showed impressive flashes, curling a shot just wide after decent build-up with Lacazette. 4